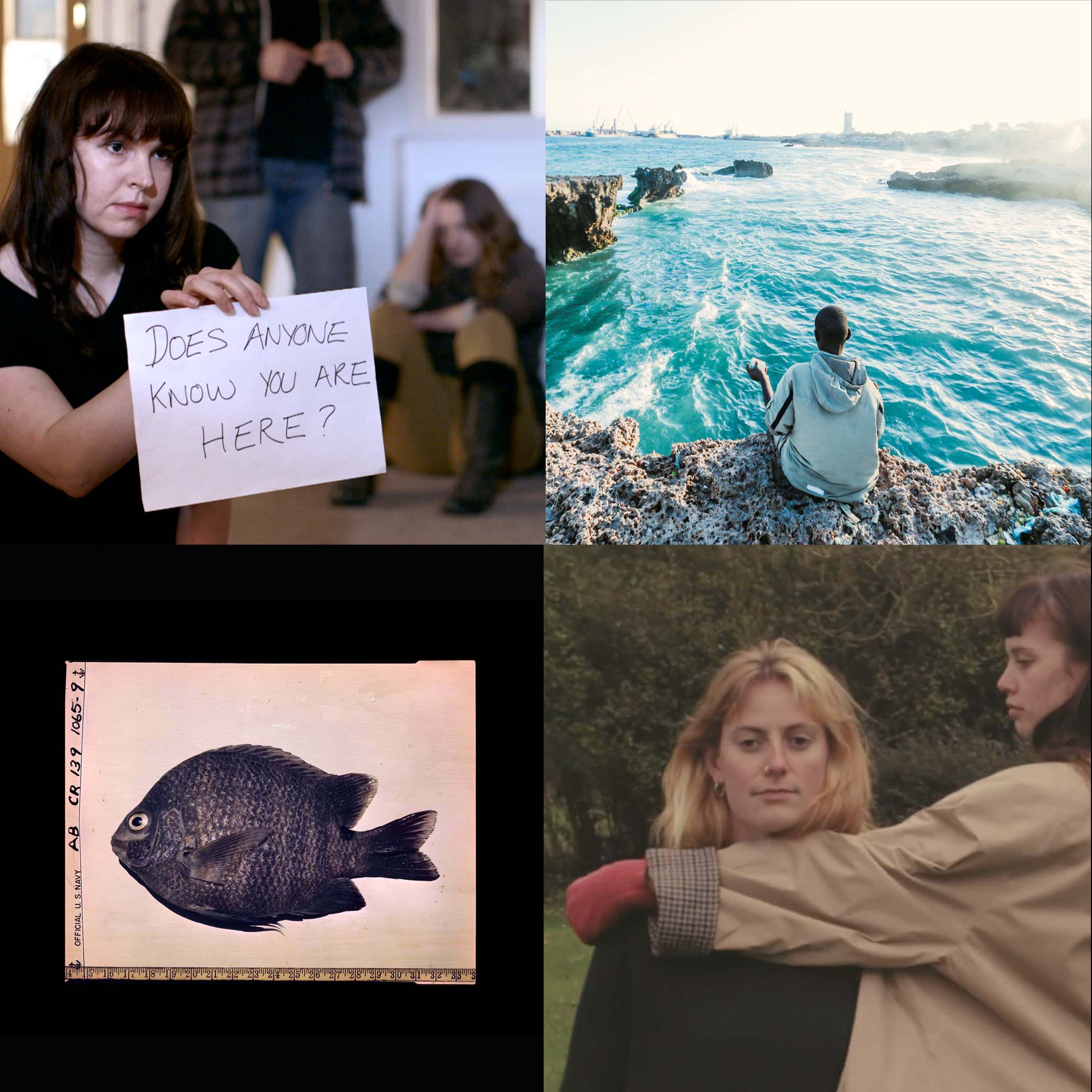 Over the last 18-months we have all become more than aware of how digital spaces operate. But can online networks operate outside structural boundaries of the film sector, and offer more space to acquire knowledge, exchange ideas and enable connections? We bring you a programme of short film packages conceived of, curated, and presented in the digital space by the first cohort of curators to take part in Aya Films’ new online learning app Curate-It. The resulting events appear to echo a similar sentiment. They urge us to think past boundaries and (re)imagine new visions of the world around us. The films included in the programme explore identity and representation on screen in a multitude of forms, foregrounding the hybridities, spectra and liminalities inherent to contemporary human existence. View the programme here.

From Tuesday 14 September, we bring you May You Never Grieve Alone, a collection that explores spiritualism, land and memory through film, ceramic and writing. 4 Waters – Deep Implicancy (Arjuna Neuman & Denise Ferreira da Silva, 2018) is as much a film project and an experiment in collaboration as it is a set of fragments drawn from a reimagined cosmos. A limited edition of ceramic shells have been produced inspired by the film and text commission thinking about grounding to soil as African Diaspora, legacies of colonialism in context of Brazil and ecological grief. Curator Khadea Kuchenmeister describes: “Collective experience within this ecological crisis is the main concern within this lyrical immersive new project that combines earth, water, fire and air in the physical and metaphorical way.” The event will include a prelude live reading of an artistic statement and new text written by Márcio Cruz with closing remarks on theme’s within each element.

Left For Deaf, screening from Thursday 16 September, will showcase a package of short films exploring deafness or disability in the horror and thriller genres, followed by a pre-recorded discussion on disability representation and storytelling in horror. Curator Charlotte Little explains: “The first time I saw myself on the big screen was during a screening of A Quiet Place. As a deaf, hearing device wearer, I saw myself in Regan, I related to her frustrations and her strength. Her deaf identity empowered my own relationship with my deafness. It’s only the last few years that we’ve seen positive change when it comes to the portrayal of disability on screen, but for a long, long time, the vast majority of disabled characters in horror were dehumanised, two-dimensional, or helpless… Left For Deaf is a spectrum of stories, creativity, and perspectives, emphasising that there’s not just one singular way to be “disabled in horror”’.

sidii hogasha roobka (like the clouds in the rain) the horn is calling! screening from Friday 17 September hopes to highlight, celebrate and foreground a new wave of Somali diaspora filmmakers and creatives. The event will feature a discussion around the themes of identity, self (representation) and culture, which are central to the films. Curator Najma Abukar believes that a quote by the lead character in short Fardosa – ‘Sometimes I feel like I live more than one life. There’s the one I live with my family. And another one I live with my friends. But then there’s the third one that I live by myself’ – encapsulates the hybridity of the Somali diaspora experience. “With this preoccupation I curated these two short films and the complementary event, focusing on Somali Cinema and a generation of up-and-coming artists of such heritage… As the great Somali “guerrilla filmmaker” Abdulkadir Ahmed Said once stated: ‘Cinema is the collective memory of a society. We link people to their own experience, their own aesthetic, which is the sum of cultural expression.’ And with this I believe The Horn [of Africa] is more than ready to express its experience and toot its own horn.”

Finally, unrest of elsewhere, curated by Esmé Babineaux will screen from Saturday 18 September. Four films following four different journeys – through landscapes and life-states, grief and intimacy – explore taking ownership of the complicated relationships we have with our individual and cultural identity, and learning to live in the uncertainty of transitionary states. Stepping into glassy cities, crashing coastlines, and local gardens, the films in this programme present requests for new worlds, personal futures and a yearning for home – of regeneration, reclamation, community, and understanding. unrest of elsewhere is a collection of new shorts all by female and non-binary filmmakers, curated around the theme of identity within liminal spaces. The screening will include original music by Glasgow band Skinny King Nobody.

All films and complementary events will be screened on our Screen-it platform.

This programme and the Curate-It app are supported by Screen Scotland. Curate-It will be available to the general public next year.

Within Screen-it you will have the opportunity to screen the films you curate to an online audience.

Evaluation is a key component of any project. Taking the time to plan your evaluation approach means you can easily look back at things that worked and things that you might need to change or adapt in the future. Evaluate-it will provide a comprehensive guide of how to monitor and evaluate your film programme or event, giving example feedback forms for audiences, funders, partners and stakeholders, and also reporting templates.

This section is where you enact and check through all the necessary logistical steps needed to bring your event to life. It contains a number of check lists and planning sheets for you to complete in order to ensure your event runs smoothly and successfully.

Identifying your target audience or audiences and ensuring your message is effectively communicated to them is key to the success of any event. Market-it will help you to identify your audience and analyse and create a marketing strategy for reaching them. This will include developing marketing assets and promotional materials, niche marketing, using social media, writing a successful press release and thinking of angles to “sell” your events as “stories” to the press.

Finances and budgeting can be a real headache, but are integral to implementing and managing any curated event. In Finance-it, you will get tips and examples about applying for funding for film events. As national and local arts budgets are increasingly squeezed, being able to justify the cultural need for your event and both write about, and present, your idea to external funding bodies is essential. You will learn how to fundraise and budget for film events, including preparing proposals, pitches and sponsorship packs, as well as budgeting and financial management.

In Curate-it you will learn about theories of film curation, the processes of researching films, the types of film screening fees to expect, how to handle distributor negotiations, screening formats required for different screenings and film transport. Throughout the chapter, you will spend time researching the films you intend to screen as part of your own event. You will look for suitable titles, distributor contacts, and think about the technical formats you will need for your event.

In Analyse-it you will learn the processes of film analysis and the different lenses through which we all watch and appreciate films and television. We will use some key terms of analysis to assess on-screen representation, sound, language and more.